“Lucky” Documentary Sheds Light on the Struggles of Homeless Mom 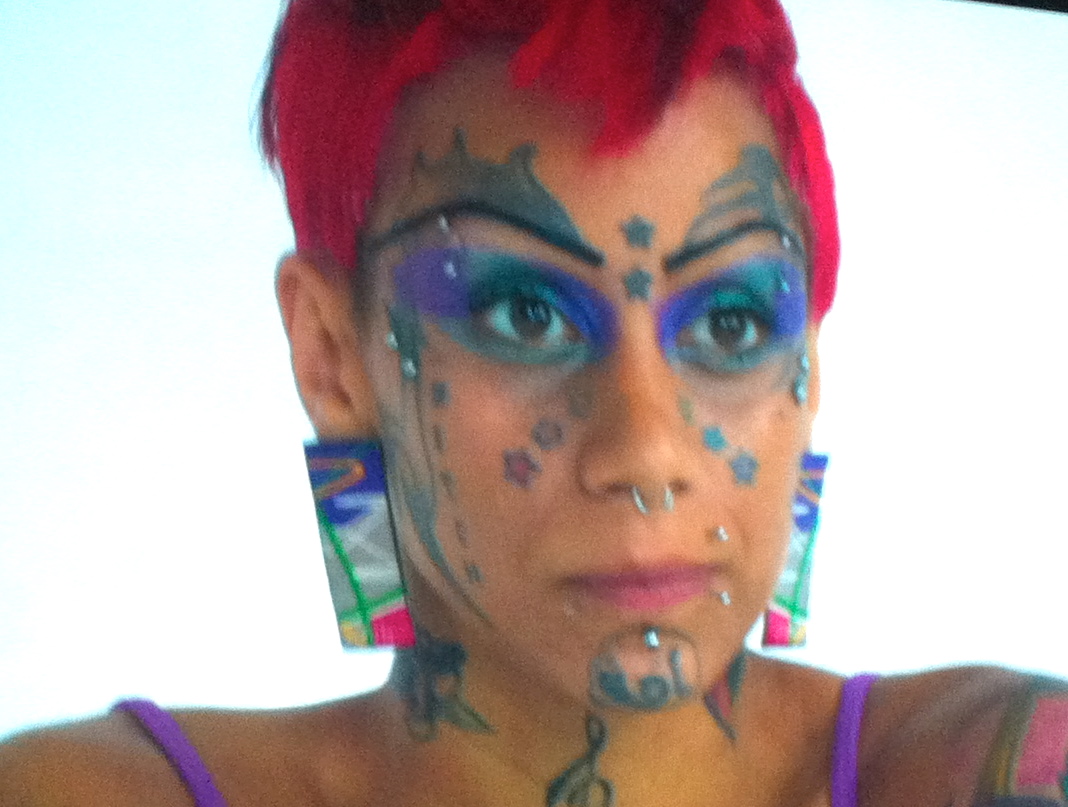 If you saw her on the street, it would probably be hard not to notice the work of art on Lucky’s face.

There are small colorful stars near her nose, edgy abstract shapes that frame her eyes, and the word ‘bitch’ inked downward one side of her cheek. Though they attract attention from people, the tattoos represent her way of dealing with deep-seeded anger and pain.

“They make me feel good when I’m getting them,” said Lucky. “It’s like inflicting pain on myself instead of going out there to inflict pain on others that hurt me.” The New York Documentary Film Festival held the city premiere of  “Lucky,” a film about Waleska Torres Ruiz, who was nicknamed Lucky after surviving a car accident. She is a blunt-speaking lesbian Latina from the South Bronx, who struggles to find a stable home and support her 7-year-old son, Joziah, since running away from foster care.

According to Common Ground, a nonprofit organization that addresses homelessness, 26 percent of the homeless shelter populations in New York City stem from foster care. Ruiz, 30, was only 9-years-old when one of her foster parents first sexually abused her. “She would tell him to put me in the bath, it was my bath time and she would set the water,” said Ruiz. “He’ll say [to her] he’s cleaning the dirt off of me…and then just start doing other things.” In turn, Ruiz said she attacked her foster care parents while they slept.

In 1992, her father died of a drug overdose and her mother of AIDS in 1995. She is one of six siblings place in various homes within the foster care. After being placed in several homes, she ran away and took to selling drugs on the street where she was raped and conceived the first of her two children at the age of 13. “I rather live in the streets where they show me more love than live in a fucking home [where] they treating me like a piece of shit,” said Ruiz.

The film shows Ruiz’s struggle for employment—pursuing everything from modeling to clerical work—and how she deals with pain in her life.

“Many abuse victims have mistrust, are angry and understandably so,” said Dr. Mel Schneiderman, senior vice president of mental health at the NY Foundling, a foster care agency. “They put up that sense of shield so they don’t get hurt and they don’t allow anybody in; protecting themselves.”

“In some ways you can see that’s very heroic and strong in terms of their self-interest,” said Schneiderman. “But unfortunately it can be self-defeating because then they continue to be victims or feel like they’re victims. They continue to mistrust others and isolate themselves from developing positive and nurturing relationships.”

After writing an article for The Fader, journalist Laura Checkoway spent six years filming the reality of four girls she met one night on Christopher Street who had become homeless after being in foster care; Ruiz was one of them. “[Filming] felt like it was a less filtered way to tell their story,” said Checkoway. “The girls could speak for themselves through film in a way that they couldn’t through my writing.”

Ruiz had an apartment for two years through the city’s Advantage program that placed people who lived in homeless shelters into permanent housing. However, Ruiz lost the apartment after the program was cut from the city’s budget. She now lives with her fiancé in Detroit. “I feel like people need to see the truth of what’s out there,” said Ruiz.  “A lot of people that know me didn’t know that I was homeless because I don’t carry myself as a homeless person.”

Keeping an open mind is what Ruiz hopes audiences takeaway from the film. “Don’t judge people,” said Ruiz  “Because you don’t know where I came from and what I been through and if I’m still living it that way.”